The content in this blog may be debatable to some, HOWEVER, I am responding to this question out of personal experience. It is not to cause a debate or spark controversy.

If you are reading this blog, I assume that you know what autism spectrum disorder entails.

Autism spectrum disorder is a condition related to brain development that impacts how a person perceives and socializes with others, causing problems in social interaction and communication. The disorder also includes limited and repetitive patterns of behavior. The term “spectrum” in autism spectrum disorder refers to the wide range of symptoms and severity.

As a clinician, I get the question, “what causes autism?” a lot.

Scientists DO NOT KNOW what causes autism specifically, so I can’t give you a research study or scientific answer!

My Experience as a Speech-Language Pathologist

I am not a scientist or researcher, but I have read TONS of research and seen a large number of children who are diagnosed as having autism spectrum disorder and I can tell you that some common characteristics.

Despite extensive research, no reliable study has shown a link between autism spectrum disorder and any vaccines. In fact, the original study that ignited the debate years ago has been retracted due to poor design and questionable research methods.

If you want my professional opinion, it’s a combination between genetics AND environment.

New Jersey has one of the highest diagnosis rates of autism spectrum disorder. Why is that? We don’t know. That is what scientists are trying to figure out.

I lived and practiced in Pennsylvania in the beginning of my career and I occasionally received a child who had been diagnosed. Once I moved to NJ, my caseload ranged from 50%-75% of children who were diagnosed.  That’s a huge jump between two states.

The Role of Genes in Autism

For other children, genetic changes (mutations) may increase the risk of autism spectrum disorder (Mayo Clinic).

Still other genes may affect brain development or the way that brain cells communicate, or they may determine the severity of symptoms. Some genetic mutations seem to be inherited, while others occur spontaneously. It is very possible that Autism is a mainly male gene.

Leave them in the comments or send them to hi@speechblubs.com!

How Is Autism Spectrum Disorder Diagnosed? 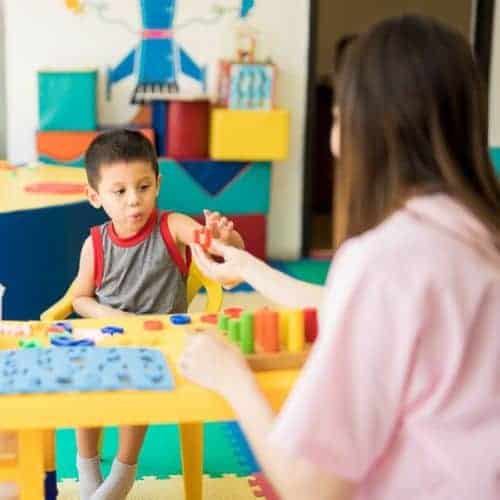