Parent's Academy › Speech Disorders › Speech Impediments › What Is Apraxia of Speech and How Is It Diagnosed?

What Is Apraxia of Speech and How Is It Diagnosed?

Jan 21, 2022 ASHA defines childhood apraxia of speech (CAS) as a "neurological childhood (pediatric) speech sound disorder in which the precision and consistency of movements underlying speech are impaired in the absence of neuromuscular deficits (e.g. abnormal reflexes, abnormal tone)."

CAS may occur as a result of a known neurological impairment, in association with complex neurobehavioral disorders of known and unknown origin, or as an idiopathic neurogenic speech sound disorder. The core impairment in planning and/or programming spatiotemporal parameters of movement sequences results in errors in speech sound production and prosody.

Phew! What does that even mean? Basically, when a child is diagnosed with CAS, they know exactly what to say, but their speech articulators (mouth, tongue, muscle weakness), prevent them from producing the sound clearly. You may have to ask the child to repeat themselves several times and still may not know what they are trying to say. 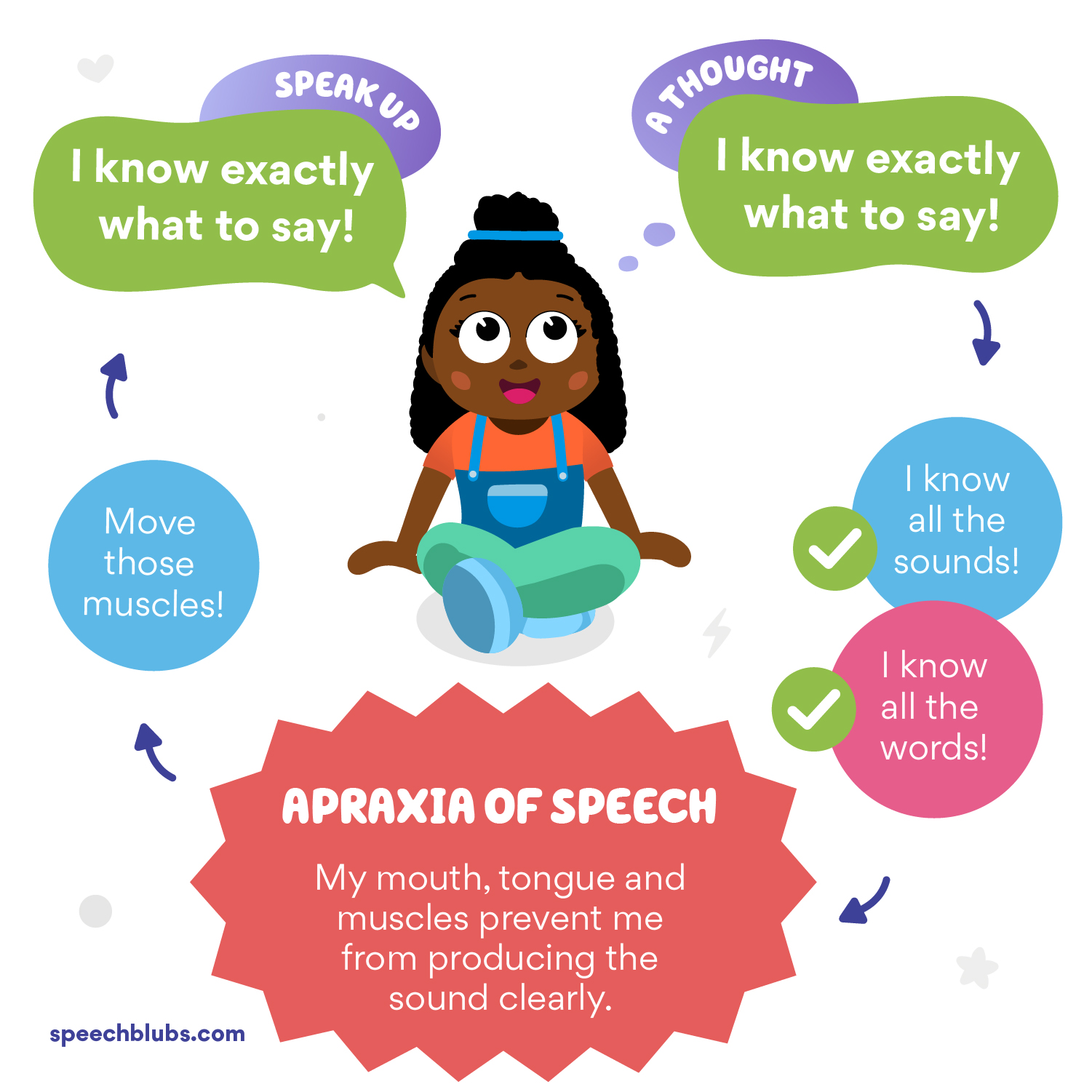 Speech Blubs is a language therapy app with a vast library of more than 1,500 activities, face filters, voice-activated activities, and educational bonus videos.

The app was initially developed for children with autism, Down syndrome, and apraxia of speech! The app uses video modeling, which is a proven method for engaging kids on the spectrum. Start your free trial today and explore engaging activities such as learning numbers, colors, shapes, animals and much more!

Apraxia of Speech in Numbers

Apraxia of Speech Signs and Symptoms

Currently, there are no distinctive features that discriminate CAS from other speech sound disorders; however, there are certain features that have been noted consistently in children who are diagnosed CAS:

There may also be non-speech related issues that occur when children are suspected of having CAS. These symptoms may include: oral sensitivity (either really sensitive or under sensitive), gross and fine motor delays, feeding difficulties, and limb apraxia (weakness in arms or legs).

Apraxia of Speech Evaluations and Diagnosis

Children who are suspected as having CAS should be referred to a speech-language pathologist for a full assessment and diagnosis. The assessment will consist of a variety of standardized and non-standardized assessments, such as parent interview. A speech pathologist will not only do assessments, they will also conduct an oral-mechanism check. This is where they will look inside your child’s mouth and see what their oral structure looks like. They will also look at motor movements that your child can or cannot create. This may include smiling or making a kiss-smile face. This is important because children who do not have CAS can perform these tasks successfully and without difficulty.

After an assessment is conducted, several things might occur.

SLP Story Time: My Cousin That No One Could Understand

I had a cousin growing up, whom I didn’t see often, but when I did, I realized his speech was very hard to understand. All of us had to ask him to repeat himself and no matter how many times he did, we still had no idea what he was attempting to communicate. Nicholas was later diagnosed with Childhood Apraxia of Speech by a Speech-Language Pathologist.

Flash forward to Nick’s grade-school years and his speech was not improving. Thinking about it now, his speech was about 25% intelligible when he entered high school. At this point, he was no longer receiving speech therapy because the school district stated he wasn’t making enough progress to stay on their caseload. My aunt and uncle didn’t feel that outside speech therapy was important enough to enroll Nick into, so unfortunately, his speech never got better.

I was at a wedding a few years ago and was sitting with Nicholas, who is a student at MIT and is a very intelligent young man. My husband turned to me and said, “I didn’t understand a word he said. What’s going on with his speech?”

I’m telling you this story for two different reasons:

(1) I want you to know how important it is to advocate for your child and push services. If the school won’t provide them, look into outside therapy. If my aunt and uncle would’ve pursued and pushed harder, I guarantee Nicholas wouldn’t sound the way he does in his 20s.

(2) Therapy is only a small portion of the day. You also need to work diligently on concepts at home, as well. This is applicable to ANY SPEECH DISORDER!

Speech Blubs App is one of the tools you can use at home to practice speech. Feel free to check the reviews from some of our parents.

This article focuses on the R consonant sound and how your child can use our app to practice saying it correctly. Download the app and...

Can Children on the Autism Spectrum have Apraxia of Speech?

So first things first, your child can be diagnosed with Autism AND have apraxia of speech at the same time. Can both disorders happen independently...