Mar 1, 2020 The effects of music and its benefits have been studied for quite a long time.

Music engages a wide range of processing mechanisms, from sound encoding (deciphering a trumpet from a flute) to higher cognitive functions such as sequencing, attention, memory, and learning. This is even more true if you are learning to play an instrument.

Due to the level of cognition needed to play music, musicians have long been researched to study brain plasticity as well as for investigating the intriguing possibility that musical knowledge transfers to other domains, such as language. 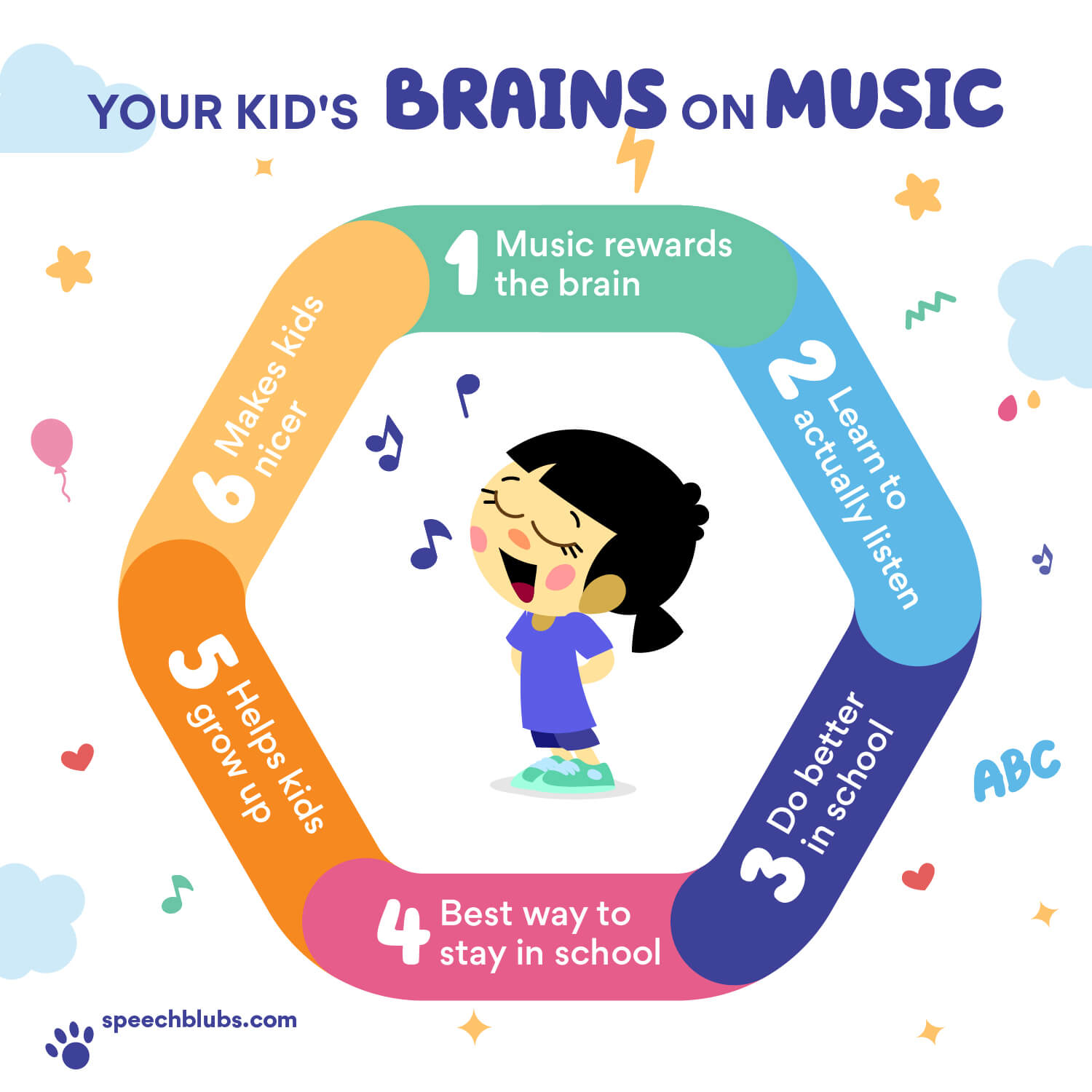 Can You Use Music in Speech Therapy?

Yes, you can! Since there has been so much research showing the positive correlation between using music in speech therapy sessions, many speech-language pathologists (SLPs) have been teaming up with music teachers or musicians in order to create treatment plans for their patients.

Whether it’s a collaboration between the two therapists in a therapy session or just the speech pathologist leading the session, when kids music is used in speech therapy, it can have a significant impact on people who suffer with speech and language disorders (The ASHA Leader, 2012, Introduction paragraph and “Where is Music Therapy Headed” paragraph).

Research indicates that there are some shared neural networks between speech and music.

Music therapy is not for everyone, however. Some patients can find it distracting or frustrating (e.g a patient who suffered a stroke). It’s important to gauge the reaction of the individual to see if it’s beneficial!

How to Use Music?

Kids music can be used in a variety of ways during a treatment session. You can have it playing as background music, have a client sing along to the song or you can have a child make up their own lyrics in order to work on vocabulary and grammar.

In many cases, music has improved a patient’s motivation, attitude, and performance in his or her speech-language therapy (The ASHA Leader, 2012). We can’t argue that music typically gives a feeling or emotion. Think of what you do when you hear your favorite song or if a song plays on the radio that you truly dislike. It evokes a reaction of some kind.

Get personalized feedback on your child’s milestones.

Get a free report

I read about a case study that talked about a 4 year old boy, named Allen, who received speech-language therapy for his numerous health issues. Allen was unable to communicate like a child should for his age. Instead, Allen would use gestures to get peoples’ attention and to request actions (Geist et al., 2008, p. 313).

According to this article, he had trouble understanding words and commands and could not communicate words or sentences clearly (Geist et al., 2008, p. 313). In addition, Allen would not participate in activities with other kids his age or try to communicate with them.

Allen was not engaged or interested in his speech and language therapy, however, he WAS interested in the music in his music therapy sessions.

The results of Allen’s music therapy indicated that social interaction increased in a 1:1 setting when using music as reinforcement.

This means he didn’t rely on gesturing to communicate; words were primarily used! Allen’s previous behavior decreased as his therapy involved music.

In Allen’s case, the collaboration between speech-language therapy and music therapy was successful.

So what’s the takeaway from all of the research and statistics?

Basically, if your child loves music, it is worth a shot integrating it into the therapy session.

If they seem bored or disinterested in regular speech therapy, play music in the next session and see if it makes a difference! Each child is unique and won’t react the same way! However, if music works, then use it!

Reach out when you have questions on how to use Speech Blubs to improve speech at home!

Blub Talks: How To Teach Speech for Toddlers with Kjirsten Broughton, M.S. CCC-SLP

Kjirsten works at her own private practice, and is an expert is speech therapy for toddlers. She is also a certified Hanen provider and trained…

‘Conscious parenting’ is a relatively new parenting style created from a mix of Eastern philosophy and Western psychology. Founded by Shefali Tsabary, a clinical psychologist…