Jan 17, 2022 For many years, the phenomenon pertaining to the underlying basis or criteria of language development has remained a debated topic among linguists and psychologists.

Psychologists describe language acquisition as something that is heavily and mostly dependent on nurture and environment. In other words, children learn first words and more if they have a speech-rich environment.

On the other hand, although linguists and nativists agree that the environment of spoken language is important in learning communication, they also argue that the child’s environment alone is not enough or the only cause for effective learning. Child development happens with everything from babbling, to baby talk, to later language education.

Help your child build vocabulary with the Speech Blubs app. Start a free trial today and explore more than 1,500 activities your little one will benefit from and love! ❤️

Linguists reason that the human brain has an innate predisposition to acquire language. Cognitive development as far as learning language manifests itself even though it is not taught (Chomsky, 2006). The Poverty of Stimulus states that children are able to learn rich language systems quickly and effortlessly, even with limited exposures, with no direct teaching (Saxton, 2017).

As a result of this innate capacity, the stages of language acquisition occur in basically the same order for all children, universally! These milestones are:

1. Pre-birth: Preparation of the human brain for language acquisition after birth 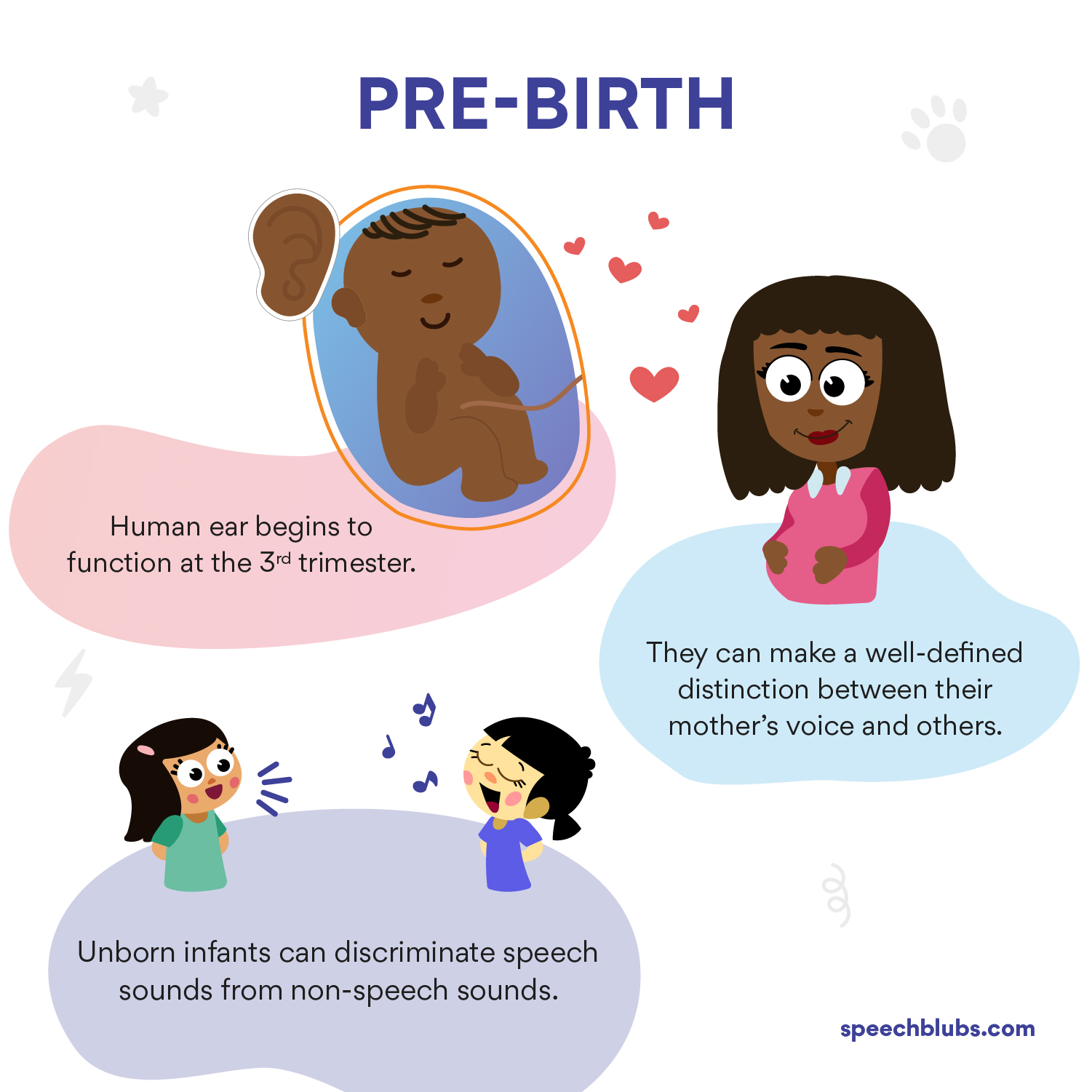 Language acquisition begins well before a child is born. Babies are initially familiarized with speech and language in the womb. The human ear begins to function at the 3rd trimester or the 7-month mark of pregnancy (Saxton, 2017). During this period, unborn infants respond to all types of sounds.

What is more fascinating is that they can discriminate speech sounds from non-speech sounds. In the womb, babies are more sensitive to their own native languages than foreign ones, and also make a well-defined distinction between their mother’s voice and others (Saxton, 2017). This phenomenon is one of many natural occurrences that supports the claim that language is hardwired in the human brain.

At this stage, infants begin to explore the properties of sounds through production. The sounds of early babbling are universal. However, by the time a child reaches the age of 8 months, a drift occurs in the characteristics of babbling (Helms-Park, 2018). Babbling becomes more distinctive. Infants begin to make sounds that would only occur in their own native languages.

A French baby and an American baby will not babble the same, as there are certain sounds that English and French do not share. At this stage, parents should expect their children to go through three phases. They follow:

In these phases, the most frequent vowels and consonant sounds that are produced by English babies are: ‘i’, ‘u’, ‘a,’ and ‘b’, ‘d’, ‘g’, and ‘m’. Vowels are generally easier to produce than consonants, as they do not require many obstructions in the vocal or nasal tract. 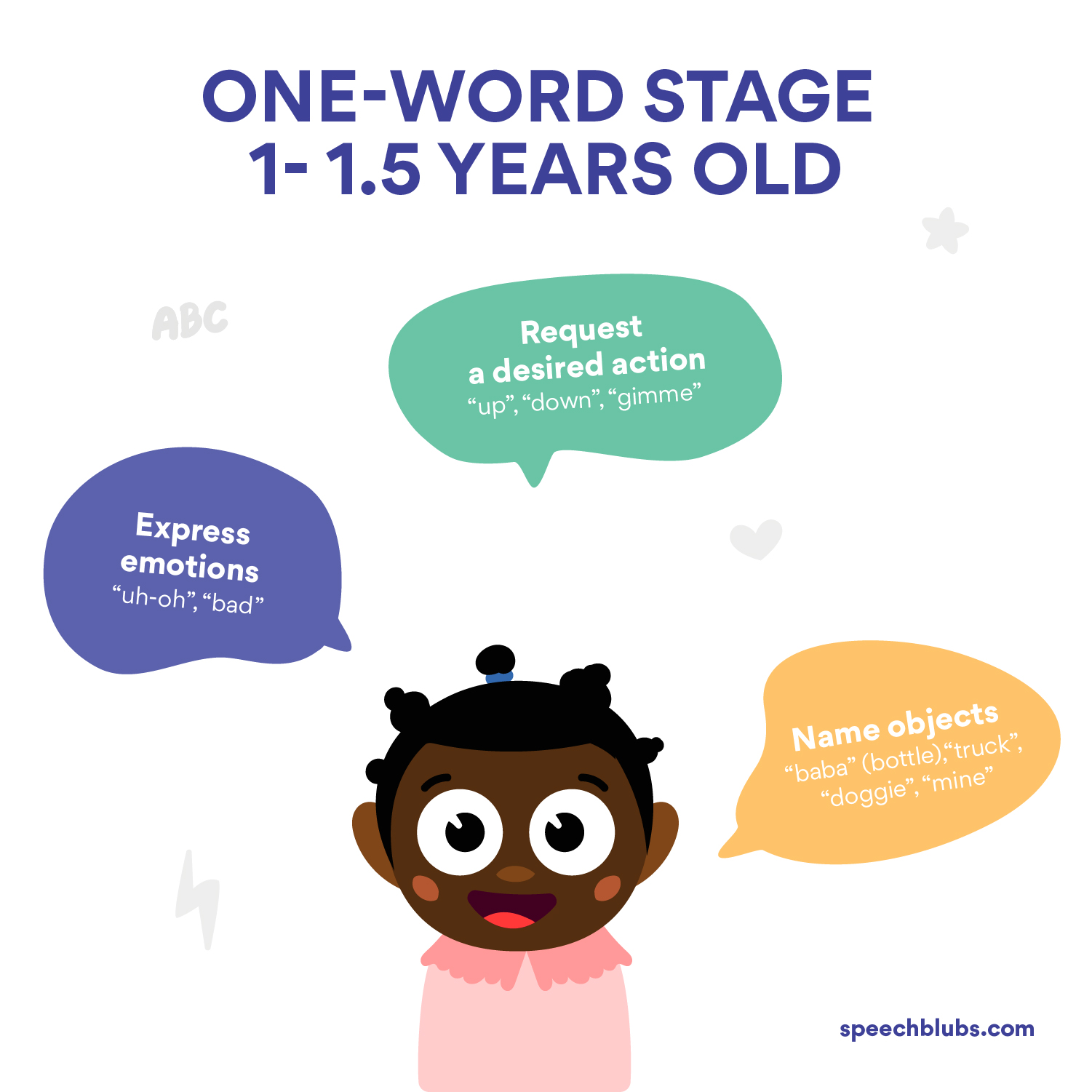 During this stage, children begin to acquire and produce real words of their native languages. A child in this stage will use single-word constructions to communicate. The use of single-word items is meant to convey full sentences provided the context.

At this stage, children know the meanings of words that they say, as speaking is often accompanied by finger-pointing (Helms-Park, 2018).

Get personalized feedback on your child’s milestones. 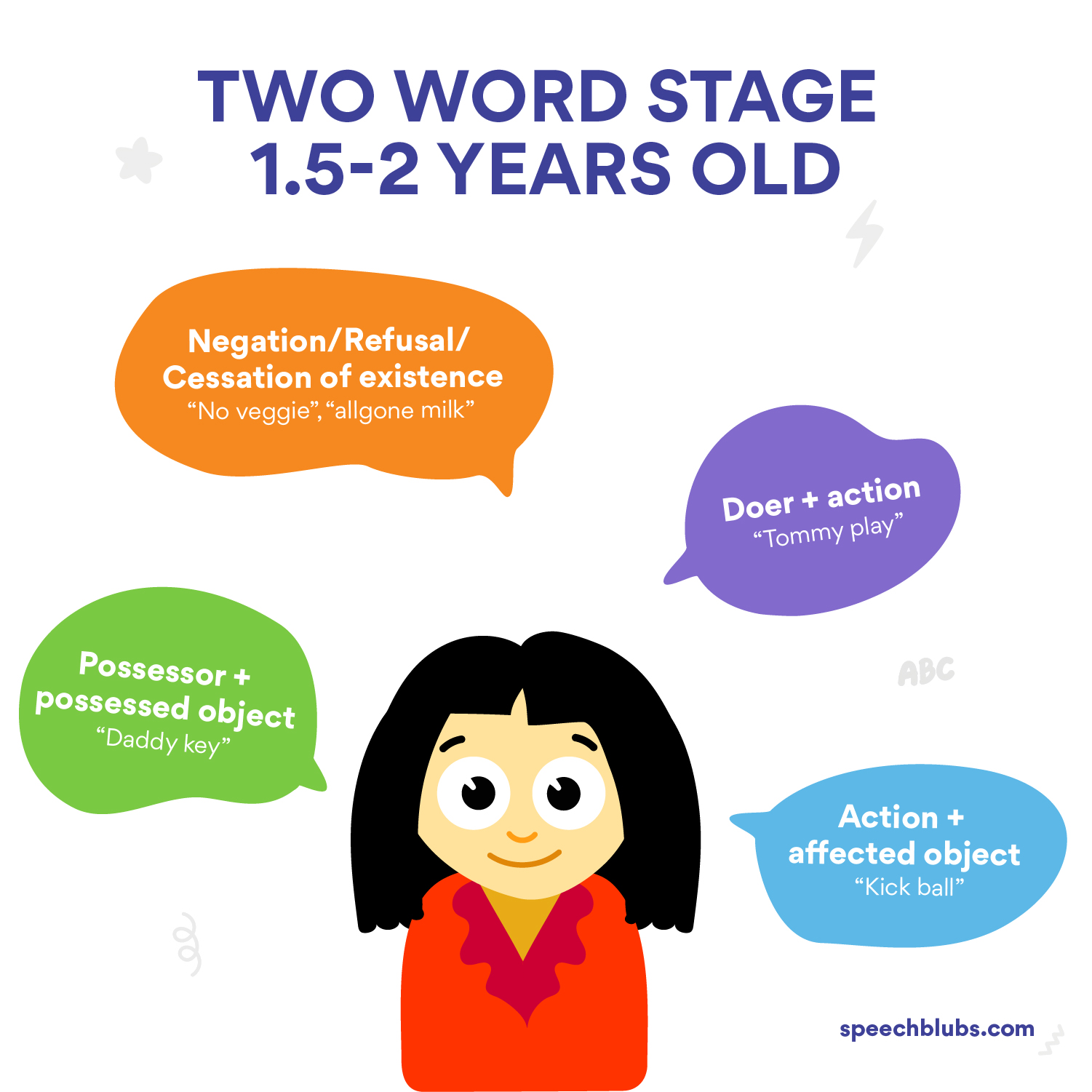 Children usually enter this stage when they have acquired about 50 words. They begin to demonstrate their knowledge of the word order that occurs in their language. English has a SUBJECT VERB OBJECT (SVO) word order. It is very common for production to take the following structures:

At this stage, lots of verbs, nouns, and adjectives emerge, as well as intonation! Intonation is a clear indication that children do not perceive speech production as one chunk, but rather as individual words coming together to convey a more complex meaning. 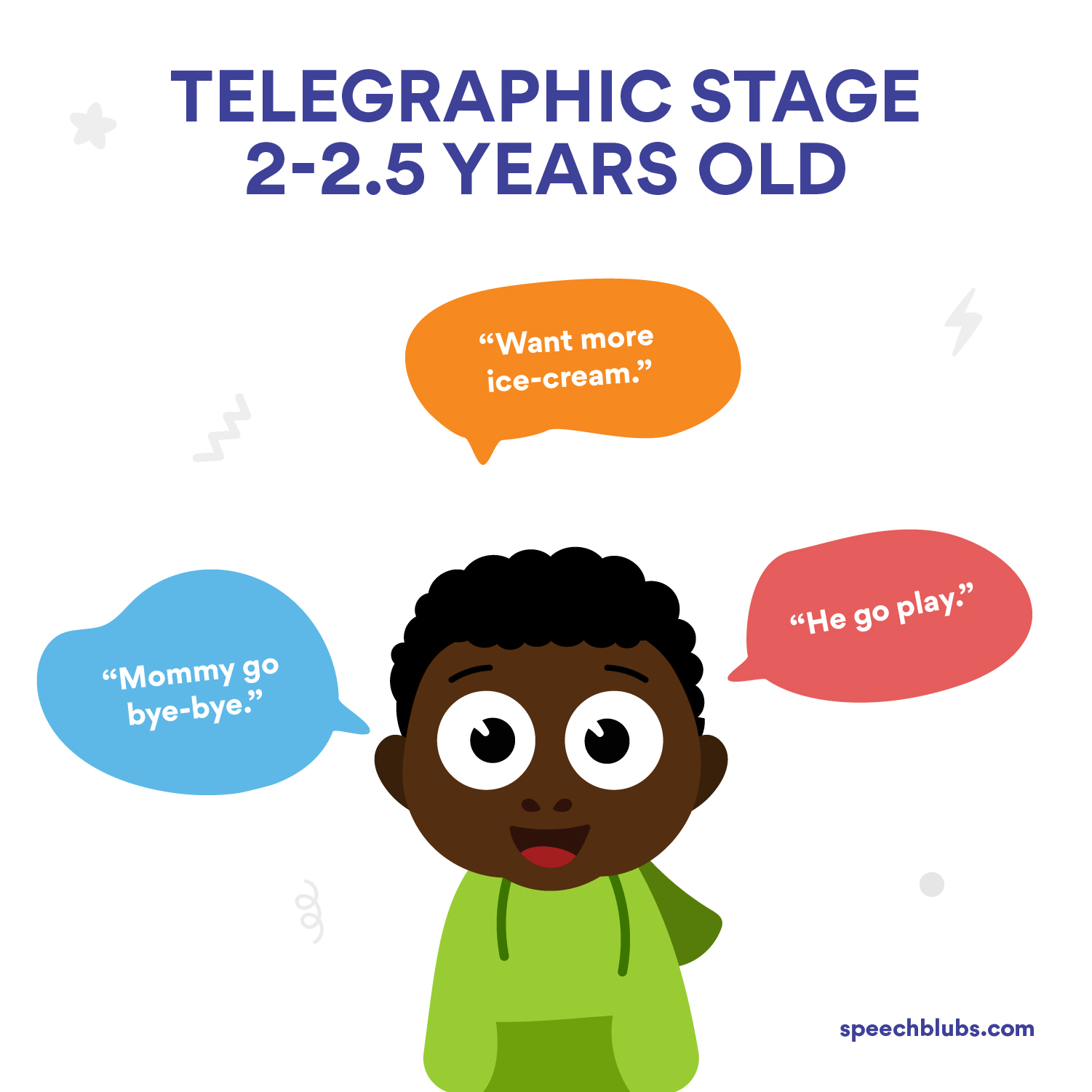 At this stage, children experience a vocabulary spurt or “explosion.” Production is pidgin-like, as grammatical/function words (little words) such as ‘the,’ ‘a,’ ‘is,’ ‘will,’ ‘of,’ ‘by,’ pluralization, tense (past -ed), verb endings/person agreements (she eat ‘s’) are omitted.

During this stage, a child will primarily communicate with content words (verbs, nouns, adjectives) and some pronouns such as ‘me’ and ‘mine.’

Although many function words are missing at this stage, children obey the word order and structure of their language. Considering the English word order (SVO), English speaking children are expected to produce phrases similar to the following sentences: 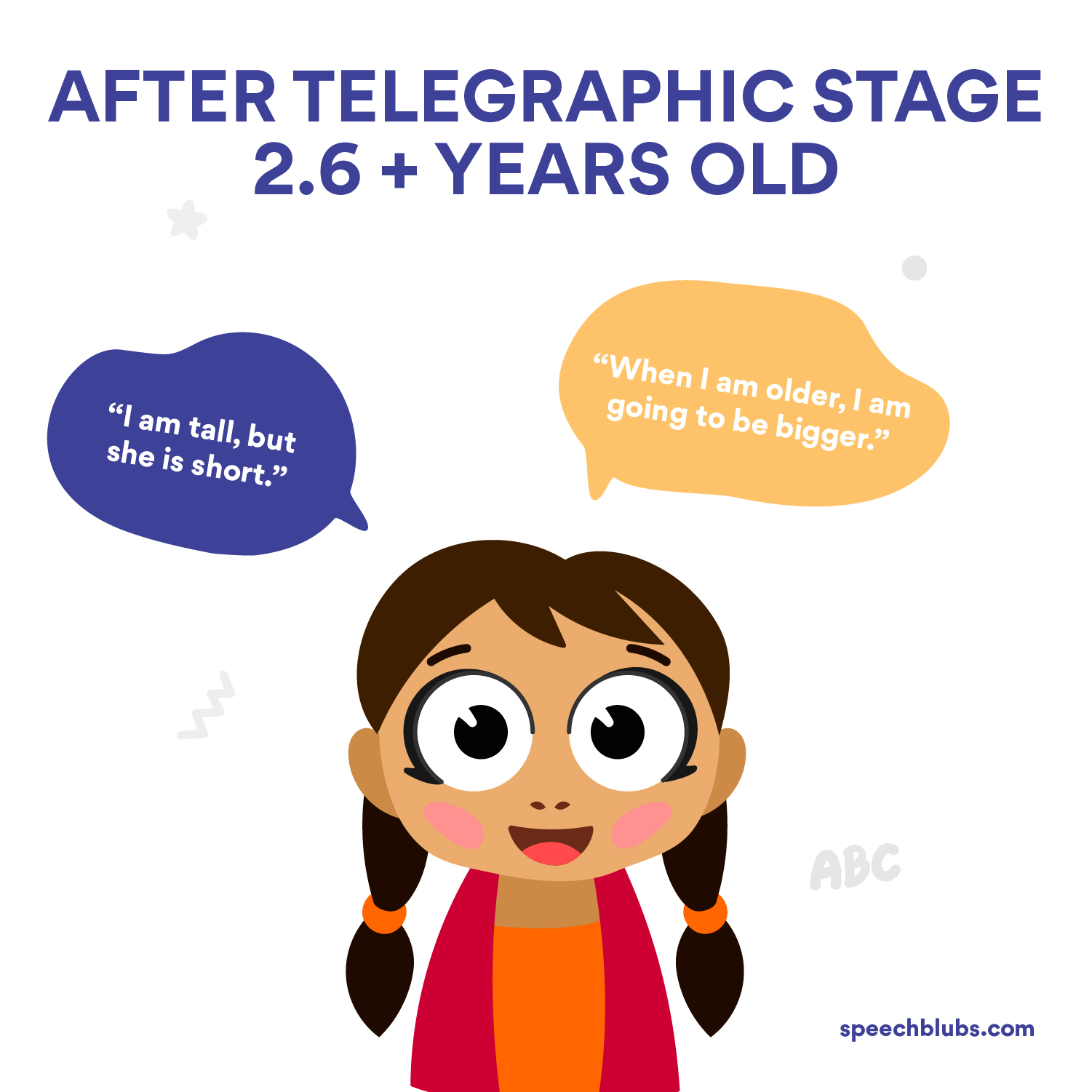 Coordination (acquired first) and subordination sentences also appear early in this stage, however, they are mastered by 4-5-years-old (Helms-Park, 2018):

Progression of more complex questions and negatives appear between 2.6- 3.0-years-old (Helms-Park, 2018). By a child’s 3rd birthday, they begin to use more grammatical/function words, such as regular plural ‘-s,’ endings on verbs ‘-ing,’ prepositions (of, in, by), but third person agreement comes a bit later “She loves candy.”  Near the end of this stage, almost everything is acquired between the ages of 5-6 (Helms-Park, 2018).

Given this guideline of language acquisition, parents should note that kids are different in their rate of language development. A child who may be behind does not necessarily indicate a language impediment. Again, every child is unique and different. Some may acquire language faster than others.

It is always important to be mindful that comprehension of language always precedes production by some months. Language competence does equate to production. Most children who encounter delays in language development, including auditory impediments, usually catch up with their peers by the age of 3 (DeLuzio, 2020).

Take this quiz and get a report on your child’s milestones and a personalized learning plan.

How to Survive in Isolation Stress-free

In our efforts to limit the spread of the Coronavirus, we are forced to spend a lot of time in isolation. Since many of you…

I have a toddler (3-years-old) and we started around the age of 2 to show her the basics of hygiene: the good handwashing habits and…